As part of the 2010 Wellington Fringe, I put on a show called "And Nothing Stirred..." in Arlo Edward's MyGalaxi gallery in central Wellington. The interactive installation was open from February 25th to March 5th, and featured two new ideas. You can see some photos from the show here. 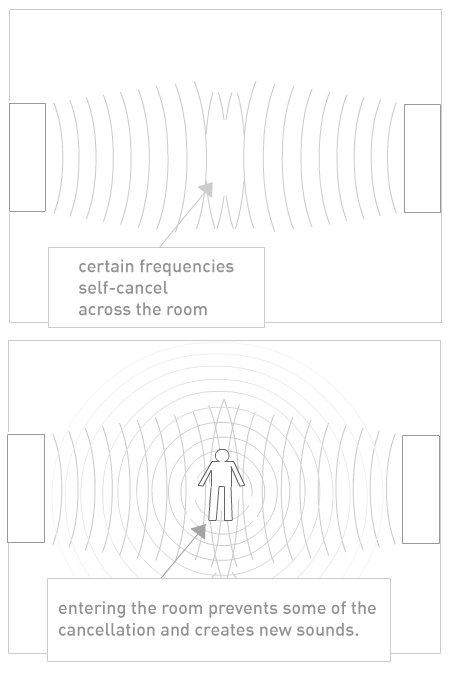 The second was my first attempt at making a finely tuned nothing, with a series of sound beams self canceling unless someone enters the installation, in which case their body will interfere with the wave fronts and create new soundscape as a physical reaction. Easier said than done, but this basement space is the perfect venue, being a geometrically simple concrete basement, so if I could get away with it anywhere, I'd get away with it there. No one, as far as I've been able to make out, has tried this before.

I got half the effect I wanted, in that people in the cancellation point at the door could hear arpeggios generated by the diffraction of people moving in the room. The cancellation wasn't enough to be silence, though, but lessons learned from this time will make next time even more amazing.

This is a video of the event.

I wanted to make a roaming component, but time being the finite thing that it is, I think this part might have to wait a year. However, since I love a good idea, here it is...

I've always loved outdoor lounges, especially ones that wander around in public, often formed ad-hoc as people move house, or transport large furniture bargains back home. The deeply random nature of fringe made me want to push a random lounge to the limit, so that no one would know exactly where or when aforementioned lounge would actually manifest.

But how to spend one's time in such a lounge was the question? Since it already had a quantum bent, and my love of chats about quantum mechanics over particularly nice cups of tea, I thought I might invite few of New Zealand's quantum physicists to talk about their work, quite possibly resulting in the wierdest part of the show being related to hitherto respectable science research? We shall see. but to add to the already not inconsiderable chaos, I'll be inviting a different mystery guest co-interviewer to the lounge to increase the reaction cross section, as it were.

* My apologies to those intimately familiar with that particular part of Heisenberg's work. The equations are not, obviously, formed in term of the relationship between position and time, but hey, it's a lounge, what were you expecting? Pair production of knives and forks cropping up around you and cakes you can have and eat as long as you do it during a Plank Time period? Pear production? For anyone else still reading this who doesn't know any quantum mechanics, just back away slowly, you'll feel much better...